PROBLEM: I would like would like to use the second router/switch as a backup one.
SOLUTION: Use very simple HSRP!

Let’s have a look at the topology diagram, at first: We can see two networks (A, B) and two Routers (1, 2). We would like to keep one router as a primary (e.g. Router 1) and the second one as a backup. So e.g. if Router 1 goes down, we can still access the other network through Router 2. Very simple, isn’t it? 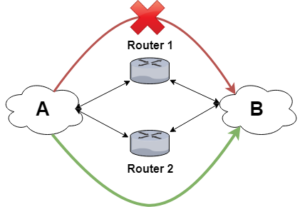 Now, let’s move to the configuration part. We have a small network, with two LANs with PCs, one router with a DHCP server (R3) and two nodes (R1 & R2) in the middle. R1 and R2 are redundant and we will configure HSRP on them. But let’s start with routing, at first. 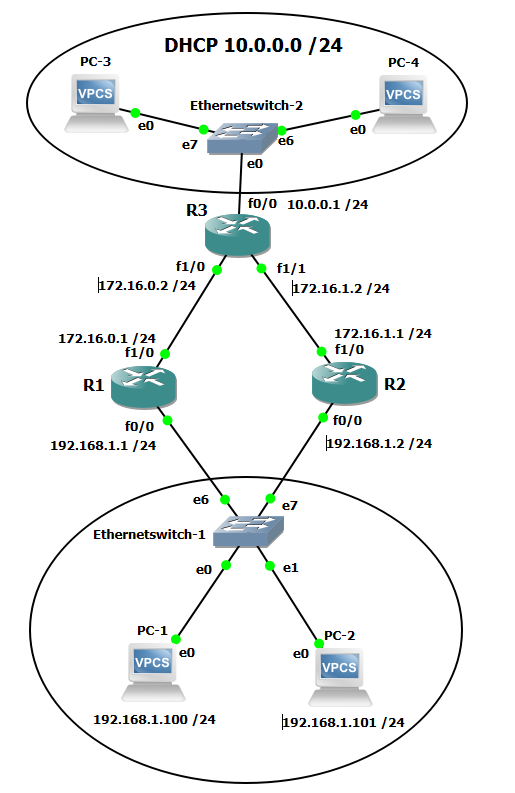 We have to use some dynamic routing here. I chose EIGRP, just because I like it. You can use RIP, OSPF or other. Configuration is very easy, just apply this config to all routers.
Number 10 (router eigrp 10) means the number of AS (Autonomous System), which is a system where devices are under signle technical administration. After this paste all network inside this AS you would like to route between. And that’s it – we have routing set.

Now, we will configure HSRP on R1 and R2. HSRP uses virtual IP and virtual MAC and this IP should be used as a default gateway for all devices connected to this network. Configuration is very simple. 192.168.1.10 will be our virtual IP.

Do the same on the second router as well.

We should set up a priority and one more thing to make it working smoothly. Priority has a range 1 – 255 (higher number = higher priority), so using it we will define primary router. Default priority (if not set) is 100. Preempt will ensure switching back to our primary router once it will be back online.

Now we should see HSRP state update on both routers and we can test how it works.
OUTPUT

And we can turn R1 off and see, what happen.

We can run a continous ping to check the delay. There is update every 10 sec by default. But we can change it using timers, hello packet is send every 1 second and failover is after 4 seconds.

We can load balance using multiple HSRP, I will show it later.